Under Amour’s stock (UA) crashed over 15% after their earnings report on October 2016: down to $30 per share… Then, on January 2017, it reported a second straight quarter of sales, considerably lower than anticipated. UA has been steadily declining to $19-20 per share (4/9/2017). Under Armour is facing challenging sales growth and public relations challenges.

UA sponsors some of the biggest names in the sports industry, including Stephen “Steph” Curry, Tom Brady, Micheal Phelps, Bryce Harper, Jordan Spieth, Cam Newton, Clayton Kershaw, Lindsey Vonn, Misty Copeland, and many more. Major League Baseball also struck a deal with Under Armour to supply the league uniforms beginning in 2020. UA has one of the best brand ambassadors with MVP recognition from Football, Baseball, Basketball, Swimming, and Golf. The sponsored athletes are making UA brand relevant just as Michael Jordan made Nike relevant in the 90s.

A month ago, Under Armour CEO, Kevin Plank expressed his lauding political views regarding President Donald J Trump. Athletes that UA sponsors such as Stephen Curry, Under Armour’s top sponsored athlete, did not share the same political affiliations regarding Trump. These political tensions have led to a strain in UA’s relationship with its athletes. Due to the current turbulent political climate consumers have actively boycotted companies that support Trump. When can we expect Under Armour’s problems to curtail so the company can adjust its public image, to become a better brand?

What happened to Under Armour?

Under Armour was worth more than $20 billion in 2015 and surpassed Adidas to become the #2 sportswear brand in the U.S. But Under Armour rapidly ran into problems that were caused by poor strategic choices.
In the past few years, they have created some critical mistakes such as investing over $710 Million on fitness apps, and over $100M on R&D for gimmicky tech products like weight scales that provided no value.

Is Under Armour a digital health, tech or an apparel company?

Recently, one of their largest announcements was selling more clothes at Khols, which UA stated will temporarily increase revenue. But it will KILL the BRAND. Do you see any Lululemon Athletica apparel at Khols? UA made a half-ass attempt on athleisure and said they are departing to focus on PERFORMANCE apparel, it sounds as gimmicky as their tech strategy.

Business Profile
Under Armour expanded their business and signed multiple famous athletes like Tom Brady, Steph Curry, Bryce Harper, and Jordan Spieth. Most of these athletes are MVPs or well-known athletes in their respective sport. Recently, UA has not done well in the stock market, but it still has all the winning traits to become a great stock and to win in the long-run.

UA’s brand identity uses a combination of strategies:
“1) On-field authenticity with professional athletes and teams that use its brand and marketing
2) Brand-building activities that position Under Armour as an authentic lifestyle brand with the broader consumer market of active lifestyle consumers, where we think it is beginning to make inroads

Supporting UA’s penetration into the sports apparel market is their investments, in direct to-consumer business (e-commerce, catalogs, less than two dozen retail stores, and 143 factory outlet stores in North America by the end of 2015), expansion of domestic and international wholesale distribution, and adjacent products. UA offers a wide range of products, including cleats, performance training shoes, running shoes, and basketball shoes. The company’s many accessories include baseball, football, golf, and running gloves incorporating HeatGear and ColdGear technologies, as well as socks, mouth guards, and eyewear developed by licensees. 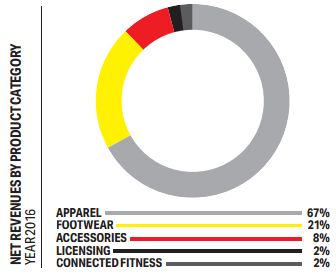 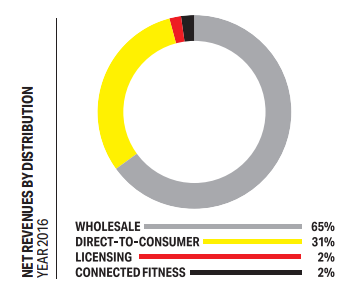 Can UA Continue its 2016 Growth or will it Decline?
As Uncle Ben would say to Peter Parker’s business ‘With great growth, comes great responsibility to shareholders.’ When UA signed Steph Curry to Under Armour, it helped propel UA basketball apparel sales to compete directly against Nike signature shoe brands like LeBron and Kobe. Investors quickly became over enthusiastic about the sales growth and valuation high as 80x P/E between 2014 & 2015. 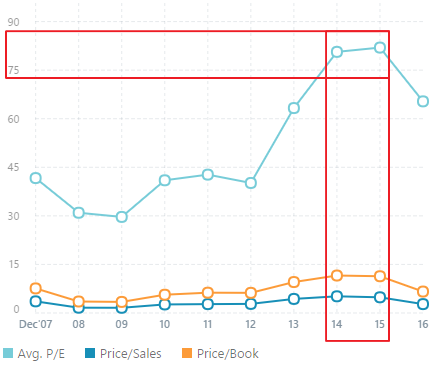 From 2012-2016, UA CAGR growth was +27%, but the company has reported a trend of declining earnings per share over the past two years. On the other hand, there was a 60% revenue growth in countries like the UK, China, and Germany. In recent UA earnings reports, management has lowered its 2017 revenue forecast to expect 10%-12% growth. UA still has great brands, profitable products, and revenues over 10% a year, but the stock went down ~50% in valuation. Investors are left to once again marvel and question of the power of the Under Armour brand, made famous by catchy commercials, and famous sponsored athletes.

Valuation $24 Per Share
Revenue expected to grow 10-12% to reach nearly $5.4 billion
Gross margin expected to be considerably lower, compared to 46.4% in 2016. With benefits in product costs being offset by changes in foreign currency and shifts in the overall sales mix, the footwear and international businesses will continue to outpace the growth of the higher margin apparel and North American businesses;

Under Armour Investment Risks-
1. Macro – a slowdown on discretionary spending

2. Distribution problems – Large chains such as Dick’s Sporting Goods and Footlocker are still expanding their Under Armour assortment. The business partnership must continue to grow and the logistic operations need to stay lean to keep operating cost low.

3. Direct to consumer problems – While the direct-to-consumer business appears to be enhancing returns, it carries higher risks through markdowns and operating leverage, and requires ongoing investment in stores, websites, marketing, and customer service.

4. Brand dilution – UA is selling apparel at Khols, and discounting products far too often. Clearance of excess product through outlet stores is hurting their brand.

5. Confusing Strategy and Overpaying for Apps and hardware – using a majority of UA’s cash and resources to launching a digital health service and gimmicky tech products. Under Armour culture and talent is not known for health or tech.